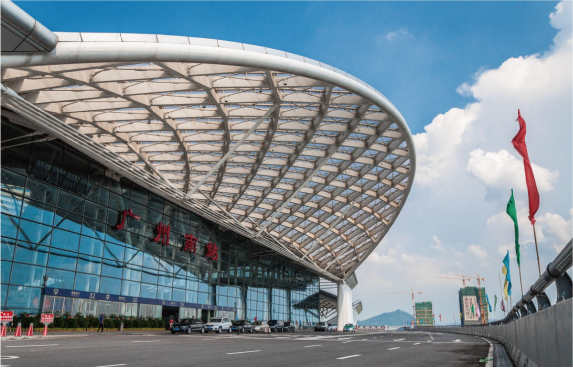 Guangzhou South Railway Station started construction in December 2004 and was put into use in January 2010.  As of January 2019, Guangzhou South Railway Station has a total construction area of 615,000 square meters and a total room area of 486,000 square meters. With a total investment of 13 billion YUAN, it has set up platform 15, platform 28 and platform 28.  It is divided into four layers from bottom to top: B1 layer (subway station, parking lot), 1F layer (entrance and exit layer, ticket purchase layer), 2F layer (elevated platform layer, east drop-off platform) and 3F layer (elevated waiting layer, west drop-off platform).  Guangzhou South Railway Station has opened convenient transfer service within the station. Passengers who buy connecting tickets do not need to leave the station after arriving at the station, but can transfer to the next train through the transfer area at the south end of the first floor.